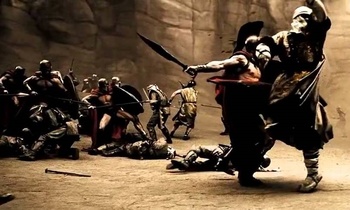 300 and 300: Rise of an Empire are obviously not meant to reflect true history. In fact, historical records of the event are already believed to be rather sensationalized and greatly embellished. Zack Snyder and Frank Miller also drew inspiration from ancient artwork, which, much like Hollywood, glamorizes battles of the past. Audiences have loved muscle-bound, half-naked supermen kicking the snot out of each other for a while, after all.

The embellishment is also heavily implied to be part of the Greek propaganda even during the first film, since Dilios verges on Unreliable Narrator.