Webcomic / Worst of the Time Lords 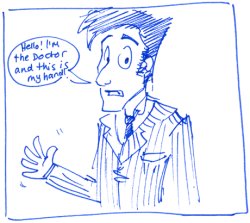 "In space, nobody can hear you cry into your pillow."
Advertisement:

A webcomic parodying the Doctor Who series, specifically, the Tenth Doctor.

The plot is simple, you are the nameless, faceless, latest companion of the Doctornote Honestly, you're not so much a companion as his therapist

and he recounts some of his adventures to you, most of which happen in his Tennant incarnation (with the occasional mention further back). While staying true to canon, they cast the Doctor as a mopey, constantly put upon, constantly depressed loser, rather than the suave science hero he is in the show.

The original storyline ended on January 1st 2009. Happily, an updated version started on January 18th 2010, this one retelling what happened after your first adventure with the Doctor ended.

Full of lampshades, character reinterpretations and pokes at some of the oddities in the show, this is the webcomic you want to be reading if you are a fan of Doctor Who.

Hell, even if you're not a fan it's pretty effing hilarious.

Sadly, it's been stuck on Indeterminate Hiatus since 2010.