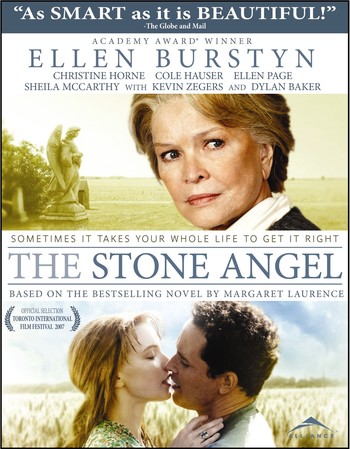 The Stone Angel is told through the eyes of 90 year old Hagar Currie Shipley (Ellen Burstyn), an elderly lady living with her grown son Marvin and daughter in law Doris in Vancouver in the 1960s. In the present, Hagar is overweight, slightly senile, and often falls, but still maintains her very stubborn personality which she has had all of her life. Faced with the threat of being moved to a nursing home, as Marvin himself is in his sixties and has difficulty caring for Hagar, Hagar reflects on her life growing up in Manawaka, a small prairie town in Manitoba. Hagar remembers her father's proud personality which she inherited, growing up as one of the more upper-class people in town, the deaths of her two brothers, her marrying Brampton Shipley (a crude widower her father considers beneath her) and her life with him. Hagar's story mirrors that of the Biblical Hagar, and her journey leads to an epiphany wherein Hagar realizes her flaws.
Advertisement:

The title refers to a marble angel marking the grave of Hagar's mother, who died in childbirth.

The Stone Angel contains examples of: