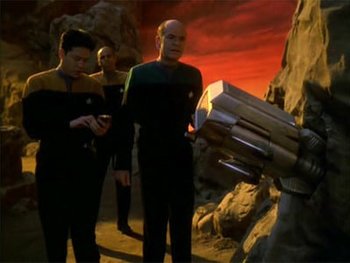 "Oh, look, an unidentified weapon! Let's bring it aboard! What's the worst that can happen?"
We're going to find a way to outsmart a smart bomb.
Advertisement:

The Doctor has a weapon beamed on board Voyager and its programming takes over his holomatrix in order to force the ship to reach its designated target.