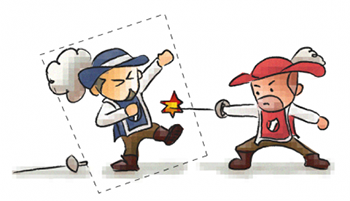 Touché, or not touché... that is the question.
"There are no hitboxes, there are just ideas."
— medibot, Lets Play Sonic Shuffle

In video games, a hitbox is the part of an object considered 'solid' for the game's purposes. It would be very mathematically complicated to model all the characters' body parts and check when they've touched, so instead, a circular, rectangular, spherical, cuboidal or capsular region of each character is chosen as the hitbox. When two hitboxes overlap, the game knows that the characters have collided; when an attack lands inside a character's hitbox, it has hit the character. Fighting Game jargon usually differentiates the two boxes by calling the boxes that hit enemies (causing enemies to flinch) as "hitboxes" and the boxes on their body as "hurtboxes."note In most cases, they overlap. Over time, game developers have been able to make boxes that act differently, and so the term "hurtbox" was born. In other genres the term "hitbox" gets used for both.

In the early days, it was a box, as a rectangular or circular solid is less math-intensive when doing the collision checks. More modern 3D games have a whole separate model made of hitboxes that closely follows the rendered model in logical space, many including different values for different body parts to enable hits to weak points for massive damage.

Sometimes, whether intentional or not, hitboxes don't match up quite right with the graphics, thus producing Hitbox Dissonance. This can take several different forms:

Some developers intentionally create this difference in collision size. The most frequent intentional use is a small player hitbox, hopefully displayed clearly so the player knows exactly what they can and can not get away with.

Fighting Game fans tend to explode when they encounter this type of problem. Maybe even the winner will Rage Quit, having unearthed the inherent unfairness. Regardless, it occasionally can be considered a Good Bad Bug. Not to be confused with Model Dissonance (although they could overlap).