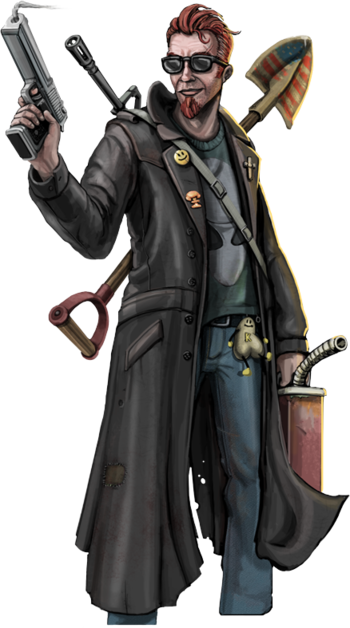 The gene pool is stagnant, and I am the minister of chlorine.
Played by: Vince Desi (Postal, non-demon grunts and moans), Rick Hunter (all other appearances), Corey Cruise (Postal III and Paradise Lost), Zack Ward (Postal: The Movie), Jon St. John (Postal 4: No Regerts)

A red-headed, trenchcoated man whose life is filled with violence, insanity and the bizarre shenanigans of the world around him. Never a dull moment for him, it's up to the player to decide how he acts.

Civvie: "I've been feeding you fast food and donuts all morning, you should be shitting hot tar, but not hungry"

"I regret nothing."
Played by: Corey Cruise (POSTAL III and Paradise Lost) 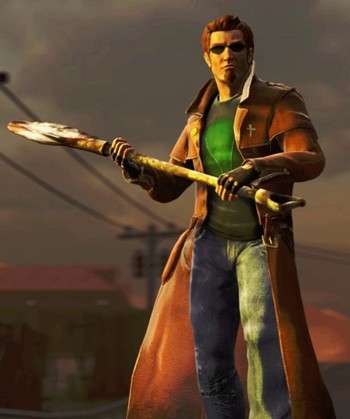 The protagonist of POSTAL III and deuteragonist of Paradise Lost. After waking up from his coma, the Dude starts to hear a second voice in his head. At first it just seems to be lingering after-effects of his gunshot wound somehow changing his voice, but it's not long before that second voice proves to be a separate entity. 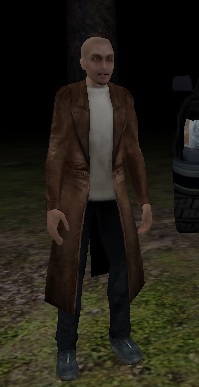 The protagonist of the Ascended Fanfic mod, Eternal Damnation. He escaped a mental hospital, where he was being held for killing a man who attempted to murder his girlfriend, Lorie Heath.

A psychiatric ward doctor who oversees the Dude's post-rampage state at the end of the first game.

A marching band that strolls through Paradise in the first two Postal games.
First Appeared in Postal 2

Played by: Himself (Postal: The Movie) 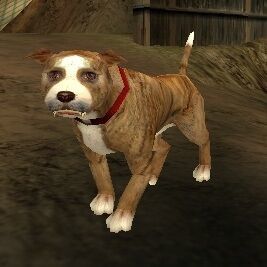 The Postal Dude's pet Pitbull Terrier, is a bit of a bitch, but is loyal to his owner.

The Postal Dude's strange uncle, Dave is a religious zealot and the leader of the Cult of Dave. In Postal III, he also owns and runs the Daveland Amusement Park in Catharsis.

Played by: Himself (Postal 2)
"If I see you selling this on eBay, I will come to your house and kick yo narrow ass." 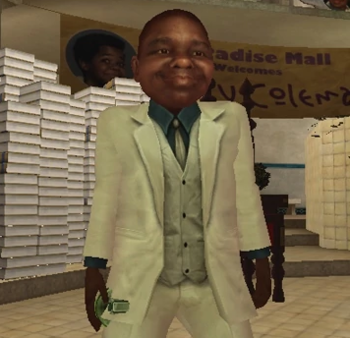 The former child star himself, Gary appears on Tuesday to attend a book signing of his autobiography, "What I'm Talkin' Bout." If he sees you selling it on eBay, he will come to your house and kick your narrow ass. 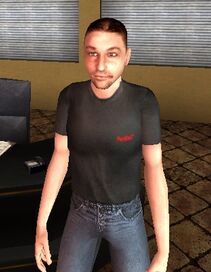 The head of Running With Scissors and a supporting character in the games and movie.

Played by: Michael Jaret-Schachter (Postal 2, Apocalypse Weekend, Paradise Lost, and Postal 4)
"I AM MIKE J, KOSHER MAD COW ZOMBIE, GOD OF HELLFIRE! ALL BOW DOWN AND WORSHIP MY ASSCOCK!" 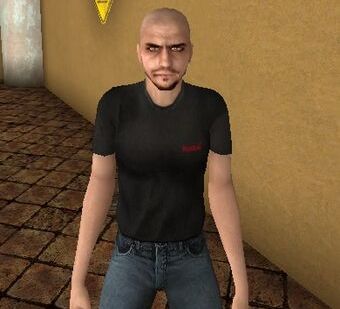 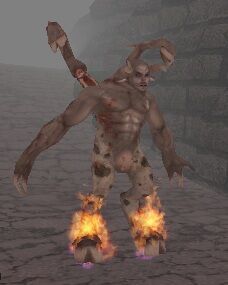 ...and as a Kosher Mad Cow Zombie.

A Producer at Running With Scissors, Mike J appears in the game as just another worker in the Running With Scissors office. However his role gets expanded in Apocalypse Weekend, where he contacts mad cow disease early on Sunday and becomes a Kosher Mad Cow Zombie. He also appears in Paradise Lost as the leader of the remaining Mad Cow Zombies, holing up in both the cemetery and the junkyard. Years later, in Postal 4, he's emigrated to Edensin and found himself a new job: its mayor.

"When you're done screwing around, I made a list of errands for you on the fridge."
Played by: Victoria Bell (Postal 2), Wendy Carlson (Paradise Lost, normal form), Ashley Maina (Paradise Lost, demon form) 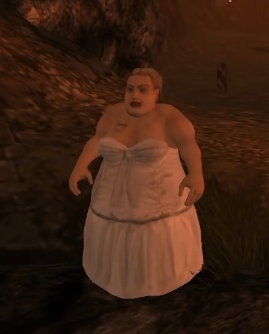 The Dude's nagging fat wife who constantly has him doing errands for her. After the Dude tries and fails to kill himself not to listen to her bitching at the end of the second game, she leaves him behind and moves back in with her mother. She returns in Paradise Lost, where she has lost most of her weight and is about to marry Mike J.

"The fuck is the difference between a duck anyway?"
Played by: Zack Ward (Paradise Lost)

The former child star who portrayed the Dude in the Postal movie, and the head of the Gingers. He rolls into Paradise on Wednesday. The Dude can optionally head to the Police Station to fight him on both Wednesday and at the end of Friday. 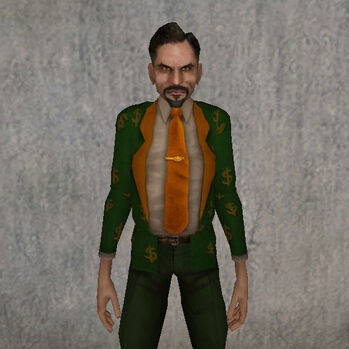 You have spunk, I like that. Tell you what, meet me in the backroom and maybe we could work out a deal.
Played by: Marcus Davis (Paradise Lost)

The owner of Yeeland's Funland, an arcade at the Paradise Mall that's a front for an arms smuggling operation. 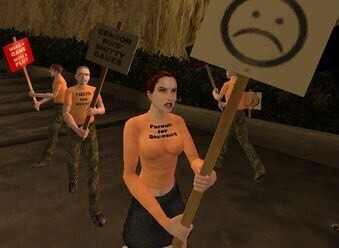 The Parents for Decency (Also known as the RWS Protestors) first hate group to appear, they attack The Running With Scissors HQ at the same time the Dude gets his check. It doesn't end well for them. 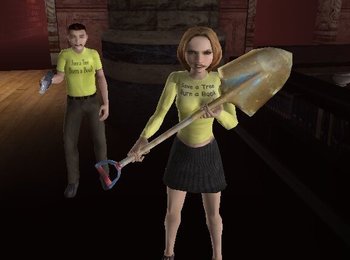 The second hate group to appear, they storm the library while the Dude is returning his book. They burn down the whole library and kill (mostly) everyone inside.

"You fight like a little girly-girl!"
Played by: Timothy Kuder 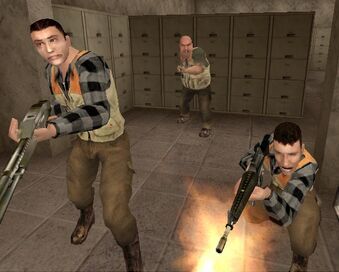 The third hate group to appear in Postal 2, they either knock-out the Postal Dude while he's pissing on his dad's grave or attack him for getting their Christmas tree. They stand out from the other hate groups as the only one to appear in all of Postal's expansions.

"Civvie 11: Okay sure that guy's about as Southern as a diverse gene pool"

The fourth hate group encountered, they are employees of Meat World who turn out to be making steaks and meat out of humans. When the Dude catches them in the act while looking for some steaks, they attack him because he knows too much.

The terrorist leader of Al Qaeda. Most of his group are stationed in Paradise's sewers and Catharsis' soup kitchens.

"It's important that nobody dies during this event, so make sure any lethal weapons stay in your pants."
Played by: Jennifer Walcott (Postal III)

The head of the Postal Babes, she allies herself with the Dude as the story progresses. Eventually, she sets up a security force and assists the Dude periodically during the Good Path. 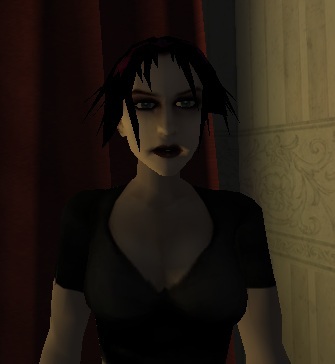 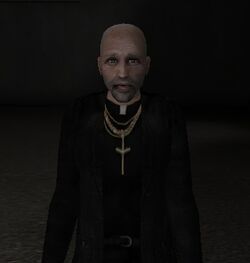 A priest John is acquainted with.

The true Big Bad and Greater-Scope Villain of the game.

First Appeared in Postal 4: No Regerts

The owner of the local employment agency in Edensin, and the first person The Dude contacts while looking for a job. 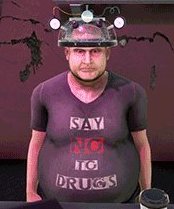 The owner and operator of Edensin's local crack den.