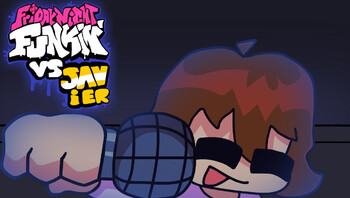 "I don't know if it's going to bother you a bit but ... but I wanted to sing some songs so I could get away from my horrible life"note "Horrible...."
Vs Javier

is a Friday Night Funkin' Game Mod created by FlakyMC_YT and composed by DavidPootis (the same person who created The Impostor Boyfriend Saga). Boyfriend and Girlfriend enter the park one day as the latter was wanting to show the former her new radio, when they run into a Friday Night Funkin' superfan named Javier Juckestoon not long after. Wanting to get away from his horrible life, he asks Boyfriend if he would sing alongside him.

Vs Javier provides examples of: