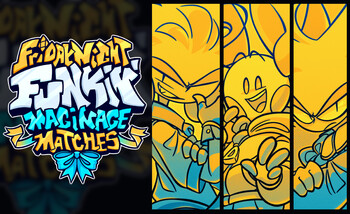 And, mind you, this is during Boyfriend's high school years.
"Man, she’s so pretty and popular... I wish there was some way I could catch her attention. Hmm… Oh! I know! I’ve been meaning to try out my rapping skills for a while now. That’s sure to impress her! I just need to find the right opponent…"
—Boyfriend, "Tic-Tac-Foe"'s cutscene
Advertisement:

is a Friday Night Funkin' Game Mod created by Fran B. where the new Week in question features three opponents, each with their own song.

Back in high school, Boyfriend (referred to as Boy) is wanting to impress Girlfriend (referred to as Girl), and figures that showing off his new rapping skills would be the way to do it. He figures that his opponent should be Tac, a Funny Cartoon Creature who he notes is the nicest guy here. After being asked by Boyfriend and being told about his desperate need to impress his crush, Tac happily accepts. After their rap battle through, Tac's friends - Lucian and Abby - come by. Quite some things ensue.