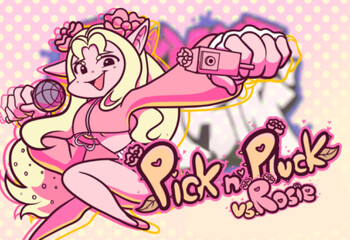 "You think you can just waltz right into Belladona territory?"
Advertisement:

is a Friday Night Funkin' Game Mod created by Shiba Chichi. It is notable for being the first to have the opponent say a random line every time you get blue balled, similar to Tankman from Week 7.

In Week 1, Boyfriend and Girlfriend walk into a very quiet but also beautiful cherry tree park that they never frequented. However, they are blocked from further entering by an elf named Rosie, who is the leader of a territorial gang known as "the Belladonnas". What's more, she has a bunch of weapons that were given to her by Daddy Dearest. Some say she is equal to Pico in power when it comes to using these weapons. Rosie (almost) immediately recognizes Girlfriend, as she happens to know Daddy Dearest, and while she allows Girlfriend in, she is extremely mad at Boyfriend for trespassing onto her territory and tells him that she must battle her if he wants to go with Girlfriend, or he gets shot.

In Week 2, Rosie decides to open a cafe and invites Boyfriend to rap battle with her so they can attract more customers.