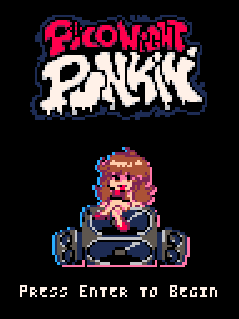 Pico Night Punkin' is a demake of Friday Night Funkin' for the PICO-8 virtual machine with programming and remade music by Carson Kompon and art by Blstr Manx made for Pico Day 2021. It attempts to be as faithful as the original despite the limitations, with mostly the same gameplay, but more primitive graphics and sound.

It is playable on itch.io

Song listnote All songs are from the original game, this is just a list of those that were carried over