The Power of Rock 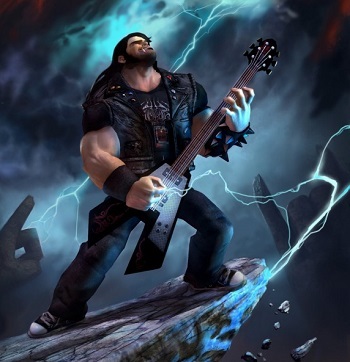 Ride the Lightning, baby.
"Hey, Antichrist-a! Beelzeboss!
We know your weakness, our rockin' sauce!
We rock the casbah, and blow your mind!
We will defeat you, for all mankind!
You hold the scepter, we hold the key!
You are the devil, we are the D!"
— Jack Black of Tenacious D, "Beelzeboss"

Describe The Power Of Rock Here, and THROW UP THE HORNS!!!

In which the world is saved and the Big Bad defeated, not through The Power of Love or The Power of Friendship, but through ROCK!!!

Yes, for some reason, music is the most capable form of creative expression when it comes to defeating the forces of evil. The battle often takes the form of a rock concert or music video. That in itself helps to explain why it's almost always music that saves the world. It'd take a very imaginative writer/director to defeat the villain with the power of Symbolism, also known as Modern Expressionism.

Incidentally, it's only "The Power of Rock" because 99 percent of the time rock is the musical genre of choice for this trope. Rock tends to be loud and theatrical, and therefore more powerful. If the main character ever harnesses such power, expect them to do so with an electric guitar as their weapon of choice, in what is the musical instrument equivalent of Heroes Prefer Swords. As the examples below show, other kinds of music work too.

Can also refer to the many, many works of fiction in which characters fight for their right to rock (or party, or dance, or whatever as long as it involves music). Expect any video game involving musicians to have the "rocking heroes fight Culture Police" plot.

Seen quite a lot in shows that feature a literal Five-Man Band or a Fake Band, and associated performances. The weapon of choice of The Rock Star when he goes adventuring.

Note: Not to be confused with Musical Assassin. This trope involves actual music playing that the audience can appreciate, not just characters playing instruments with the sonic power to kick ass. There are few game examples of The Power Of Rock outside of music-based games.

A form of Magic Music or Disco Tech.

Compare Loud of War, Care-Bear Stare, The Power of Love, The Power of Friendship, Autobots, Rock Out!, A Little Something We Call "Rock and Roll", Great Balls of Fire!, Brown Note, Rock Me, Asmodeus!, Make Me Wanna Shout, Clap Your Hands If You Believe, Awesome Music. Contrast Sex, Drugs and Rock & Roll. May be presented as a form of Cool and Unusual Punishment.

Alternative Title(s): Power Of Rock, Music Can Do Anything, The Power Of Music