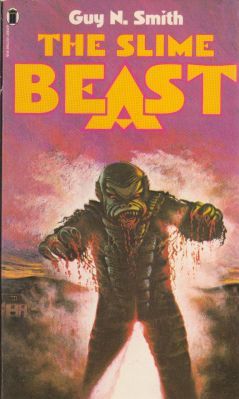 The Slime Beast is a 1975 horror novel written by Guy N. Smith (Night of the Crabs, The Festering). An expedition led by Professor John Lowson is searching for King John's treasure in "the Wash," an estuary at the north-west corner of East Anglia on the East coast of England, where Norfolk meets Lincolnshire. Accompanying him are his niece Liz Beck and assistant curator of the British Museum Gavin Royle. The trio find more than they bargained for, both in the form of hostile locals from the nearby town of Sutton who believe the treasure ought to remain where it is, and a ferocious amphibian monster covered in slime which the expedition unearths and which wants to do its darnedest to kill everyone it runs into.
Advertisement:

Smith wrote a sequel, Spawn of the Slime Beast.