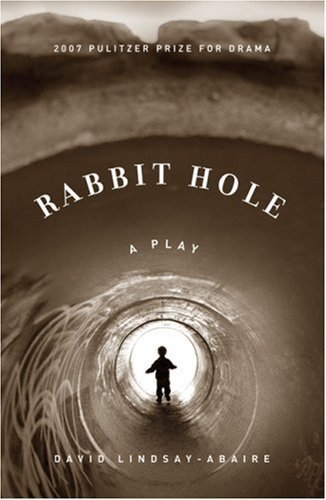 Rabbit Hole is a 2007 play by David Lindsay-Abaire:

Becca and Howie Corbett are a married couple living somewhere in suburbia. Eight months before, their four-year-old son Danny was killed when he dashed out into the street chasing after his dog and was hit by a car. The death of their son has upended their lives. Husband and wife struggle to deal with their grief, which threatens to destroy their marriage.

Other characters include Becca's mother Nat, Becca's sister Izzy who has just gotten impregnated by her boyfriend, and Jason Willette, the 17-year-old boy who hit Danny in his car.

Cynthia Nixon and John Slattery appeared in the original Broadway production as Becca and Howie. In 2010 Rabbit Hole was adapted into a film that starred Nicole Kidman as Becca and Aaron Eckhart as Howie.