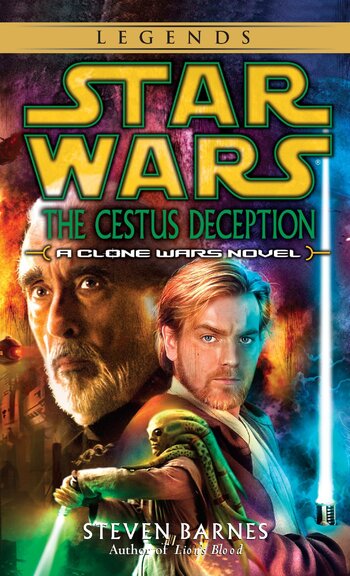 A Star Wars Legends novel by Steven Barnes, The Cestus Deception stars Obi-Wan Kenobi and his fellow Jedi Knight Kit Fisto, who are sent to the planet Ord Cestus in order to halt, through whatever means necessary, the production of the deadly bio-droids nicknamed "Jedi-Killers" by the criminal underworld. The two Jedi split forces, with Obi-Wan attempting a political resolution while Kit, with the aid of a small group of clones, trains the natives in case a more violent solution is required.
Advertisement:

But the Republic, slowly turning to a darker path as the Clone Wars escalate, is prepared to launch a full scale orbital attack on the production facilities if the Jedi fail, disregarding the countless lives that would be lost were such a strategy enacted. Facing a crisis of conscience, the two Jedi must find the wisdom and strength to prevent such a bloodbath and safe-guard the Republic, while abiding by the ancient code to which both have pledged their lives.