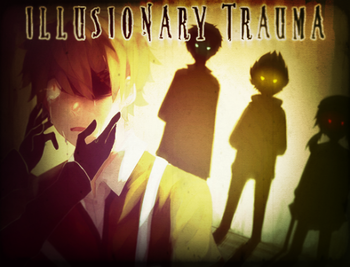 A short game about the GDAnote Gay Dessert Anime from Tumblr, Illusionary Trauma has four anthropomorphic desserts — Giga Pudding, Lemon Pie, Hershey, and Pizza — explore an abandoned mansion. There are rumours about the mansion, such as a mirror that can trap you for all eternity. The four split up and you're given an option to choose which dessert to play as, so long as Hershey is last.

Tropes appearing in Illusionary Trauma include: