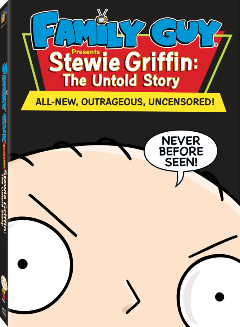 The entire film begins with a news report involving the premiere of the actual film itself at the Quahog Performing Arts Center, where several characters have been invited. Eventually, the Griffin family arrives and each of them make a grand entrance, with the exceptions of Meg and Chris. Brian comes out of the limo and asks how everyone got in his bedroom. Chris comes out and makes a joke that he was sitting backwards in the limo so his underwear was going the right way. Stewie comes out and describes his political career, which resembles Saddam Hussein's. Lois falls out as she is extremely drunk because there was booze in the car and is followed by Peter, embarrassed beyond belief. Meg comes out and reporter Tricia Takanawa asks her a question and before Meg can even respond, David Bowie arrives and Tricia's attention is drawn to him as she dry humps his leg and offers to make him fish ball soup. Other guests included Drew Barrymore, the Kool-Aid Man and Cleveland. It ends inside the theater, where Quagmire is making a bootleg recording of the film (after momentarily distracted by a woman's cleavage). On screen we see fictional trailers for fictional movies (including a very clichéd Walt Disney movie). Then, on a green background, we see a sex warning, then it cuts to the 20th Century Fox logo.

The film opens at the Quahog Community Swimming Pool. Encouraged by Peter and Lois to take swimming lessons, Stewie meets the star pupil of the class, Brad. Jealous, Stewie decides to try and outdo him in a swimming race. He nearly drowns in the process, while Brad finishes in first place. Feeling humiliated and wanting to kill his nemesis, Stewie rigs a lifeguard chair with dynamite and lures Brad beneath it by putting a piece of marzipan under it. However, Stewie's detonator malfunctions, and he blows himself up and is crushed beneath the lifeguard chair. Stewie awakens in Hell. Stewie is abruptly brought back to Earth, and he decides to change his ways.
Advertisement:

Meanwhile, Peter gets a job at Quahog 5 News, hosting a ranting segment known as What Really Grinds My Gears, in which he rants about things that bother him, such as Lindsay Lohan and the 19th century. Peter becomes extremely popular, overshadowing Tom Tucker and making him feel jealous. His jealousy causes for himself to get fired. Stewie's attempts at being a good boy mainly revolve around smothering Brian with affection, much to the latter's consternation. Brian finally goads Stewie into reverting to his old, violent ways, resurrecting Stewie's fear of Hell. Deciding to follow Brian's example of controlling anger through drunkenness, Stewie becomes an alcoholic; Brian, seeking to cure Stewie, takes him out for a night of drinking at The Drunken Clam which culminates in Stewie ramming Brian's car through the wall of the bar.

Knowing Stewie is Peter's son, Tom takes advantage of the situation and presents footage of the accident at the news station. Peter loses his job and Tom regains his post.

The next morning, Stewie wakes up naked in his crib with a hangover, apparently having blacked out and given Roger Moore his phone number the night before. Stewie laments to Brian his lonely existence in the world, and wishes that there were someone else to whom he could relate.

Bango Was His Name Oh

Later, while watching television, Brian and Stewie see an interview with a San Francisco man who looks and sounds exactly like Stewie. Stewie is convinced that this man is his real father (he's really not proud of having Peter as a father) and resolves to travel to San Francisco to meet with him.

Learning that Quagmire is going on a Cross "Cuntry" (his spelling; Quagmire is apparently so perverted that he doesn't believe "country" is spelled with an "o" between the "c" and the "u") trip through all 50 states with the intent of having sex with a woman in every state, Brian and Stewie hitch a ride in his "Wanna-bang-o". At a motel in New Jersey, Quagmire is handcuffed to a bed and mugged by a cleaning woman; Stewie finds Quagmire, and rather than free him, steals the "Wanna-bang-o". Having obtained "pep pills" from a trucker, Stewie goes off-road and crashes the vehicle. When they are stranded in the desert there is a clear homage with In the Army Now. Stewie almost gives up, but Brian gives a pep talk.

Meanwhile, in the B plot, Peter and Lois decide to encourage their older children to date others so that they could spend some time alone together without interruption. They succeed in the end, only to question whether their motives were good and if the kids were really ready to see other people.

Arriving in San Francisco, Stewie and Brian track down the man from the television. Stewie confronts the man on a trolley, and is shocked to discover that the man is actually Stewie from 30 years in the future.

The movie then cuts to a brief intermission (with a running commentary from the theater patrons, since they are still watching the movie).

Stu Griffin, as Stewie's future self is called, is taking a time-travel vacation, which is how people in the future take time off. Stewie tricks his way back to the future with Stu. In the future, Stu refers to the younger Stewie as a child named "Pablo" from Nicaragua. Amazingly, no one seems to notice the similarities between the two.

In the year 2035 at a family dinner, Stewie discovers how the lives of his family will pan out: Chris will become a traffic cop and marry a hateful, foul-mouthed hustler named Vanessa who belittles him and insists on putting Peter and Lois in a retirement home; Meg will go to college and get a sex change, becoming a man named Ron; and Brian will die of theobromine poisoning by eating chocolate he found in the garbage, go to Heaven, and spend a rather promising eternity drinking with Ernest Hemingway, Vincent van Gogh and Kurt Cobain (who, in common, have committed suicide, only Hemingway, van Gogh, and Cobain intentionally committed suicide by shooting themselves and for deeper reasons: Hemingway was weighed down by his own genius, van Gogh couldn't reconcile his feelings with society's feelings [plus, he was mentally ill], and Cobain didn't want to live to see his music be dumbed down and usurped by greedy, soulless corporations).

Stewie over time learns of his own horrible fate: at age 35, he will be a virgin working for the Quahog Circuit Shack (a spoof of Circuit City, Best Buy and Radio Shack) and living in a low-rent apartment (where he still keeps and talks to his teddy bear, Rupert) and his only friend will be a female co-worker named Fran. Furthermore, he is a doting mama's boy, having long ago abandoned his matricidal tendencies.

Disgusted with the way his future life will turn out, Stewie screams "I will accept the crappy place and the dead end job but I will not accept being a 35 year old Parade magazine reading VIRGIN!!!!!!!!!!" and then remodels Stu's apartment and coaches him through The Joy of Sex with the intent of getting Stu to lose his virginity to Fran. Stu and Fran do end up having sex—for about eight seconds, followed by 40 minutes of Stu crying, and then offering to pay for the sex. Fran goes back to Circuit Shack and tells everyone about it, costing Stu his job. Returning home, he finds that his apartment is in flames, ironically caused by "stress-release" candles Stewie placed while redecorating.

His life now ruined, Stu laments the day of his near-death experience at the Community Pool. Noting that it may be a clue to the reason of his future life, Stewie asks him to elaborate, and Stu reveals that memories of the experience will re-surface when young Stewie is 20, causing him to regress and preventing him from taking any risks (hence why he grew up to become such a wimp with a dead end job). Armed with this knowledge, Stu and Stewie proceed to the retirement home where Lois now resides to ask for money to purchase a new time-travel watch; Lois, who reveals she knew all along that "Pablo" was Stewie, obliges (but requests that Chris must never marry Vanessa). They buy the watch, but before Stewie leaves Stu realizes that his history will change if Stewie succeeds, and that they will never see each other the same way again. They say their final goodbyes and Stewie begins his mission.

Stewie travels back in time to the day of the accident (with a brief stop, at Lois' request, to kill Vanessa with an Rocket-propelled grenade on her wedding day with Chris) and runs to the pool like Ferris Bueller from Ferris Bueller's Day Off. He manages to prevent himself from getting crushed by the chair. Past Stewie wonders what happened and asks Future Stewie who he is - Future Stewie responds, and after a brief talk Past Stewie vaporizes Future Stewie with his raygun. By obliterating Future Stewie, the trajectory of his future is changed, without him knowing. The family packs up and heads home, with Meg bidding farewell to a boy to whom she's been talking to, considering how much she likes his name: Ron.

After the film ends, we cut to the after party, where each member of the Griffin family is interviewed by Tricia Takanawa, sharing thoughts involved with Family Guy's cancellation and comeback. In the end, during his final speech, Peter rips out a fart as a joke, and everyone laughs. The film ends with the screen pulls back, revealing it to be on another TV screen with Peter next to it. He explains that farting is no laughing matter, then rips out another fart, revealing it to be another joke.

Stewie's pursuit of a taxi that contains the man he has been looking for is unceremoniously cut short by a fruit stand. When Stewie wonders aloud why this trope always happens, we're shown a fleet of fruit stands being deployed to chase scenes like taxi cabs.

Stewie's pursuit of a taxi that contains the man he has been looking for is unceremoniously cut short by a fruit stand. When Stewie wonders aloud why this trope always happens, we're shown a fleet of fruit stands being deployed to chase scenes like taxi cabs.