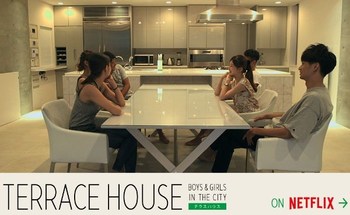 Terrace House (テラスハウス) is a Japanese reality show that started in 2012, originally airing on Fuji Television as part of their "COOL TV" segment under the name Boys × Girls Next Door for 8 seasons until 2014 and concluding with a standalone movie in 2015. The show follows a group of people living in the eponymous Terrace House in the Shōnan region as they live their lives, work towards their dreams, and make connections with one another.

What sets it apart from other reality shows which follow people living under the same roof is that the housemates (or members as they're known on the show) will leave Terrace House of their own volition, when their career or personal life requires it, they feel like their goals have been met, or they feel the house has nothing more to offer them. The show also has a panel of commentators composed of various Japanese celebrities and media figures who discuss what happens during the course of the episode and also provide an audio commentary track on Netflix.

In 2015, a new season of the show taking place in Tokyo titled Boys & Girls in the City premiered as a co-production of Internet streaming service Netflix and Fuji TV, running for a total of 46 episodes before concluding. It also marked the first time the series was available for international release. The next season of the show, entitled Aloha State, would shake things up by changing the location of the house from Japan to Hawaii, but still following a group of Japanese-speaking young adults. Aloha State concluded in summer of 2017 after 36 episodes.

The following series, Opening New Doors, brought the series back to Japan, taking place in Karuizawa in the Nagano district. It premiered in December of 2017 and lasted until February of 2019 for a total of 49 episodes. The finale teased the newest series, Terrace House Tokyo 2019-2020, once again bringing the setting back after two series.

Terrace House has been noted by many Internet commentators as being a refreshing take on reality TV, being relatively free of staged drama and fights that are commonly associated with similar shows and focusing more on the bonds and relationships formed by the housemates, who seem like ordinary people rather than over-the-top characters.

However, after the tragic death of housemate Hana Kimura in 2020 which is believed to be linked to cyberbullying after a dramatic incident on the show, the Tokyo season was cancelled and the last episodes that were filmed remained unaired. Many fans have called into question the authenticity and nature of the series after former members have come forward and described being asked by producers to stage scenes and fake drama to drum up interest in the show, also admitting to be cyberbullied. The future of the series now remains uncertain.