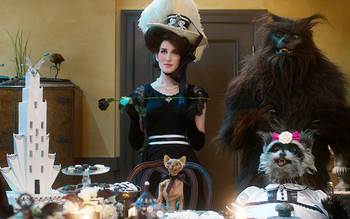 Our cast (clockwise from center: Christine, Edgar, Rose, and Rankle
Christine: We've all had a late-night guest or a hungry little critter craving a bedtime snack, but midnight is no time to get lazy - and the kitchen of the perfect hostess never sleeps.
Rankle: Who is she talking to?!
— Episode 1.
Advertisement:

The Curious Creations of Christine McConnell is, to boil it down to its bare essence, Martha Stewart meets the Addams Family meets Sesame Street. It follows Christine as a sort of artsy-domestic home artisan, making treats and crafts along with a collection of colorful creatures (themselves artfully created and puppeteered by the Jim Henson Studios): Rose (a slovenly and libidinous patchwork reanimated creation made of essentially roadkill), Rankle (the prissy and sarcastic mummy of an ancient Egyptian cat), and Edgar (an earnest, awkward humanoid wolflike creature recovering from an addiction to human flesh and blood). Recurring characters include Norman, Christine's boyfriend who is probably a serial killer and Vivienne (played by famed burlesque performer Dita Von Teese) the ghost who only appears in the mirrors.