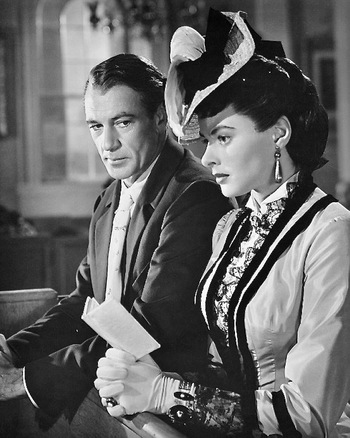 Saratoga Trunk is a 1945 period drama film directed by Sam Wood, based on Edna Ferber's 1941 novel of the same name.

Clio Dulaine (Ingrid Bergman) is a Creole woman who comes back to 1875 New Orleans after having grown up in Paris. Clio is the illegitimate daughter of a New Orleans aristocrat and his mistress. Some years ago, Clio's mom tried to shoot herself, her father grabbed the gun, and it was her father that got shot and killed. Mr. Dulaine's legitimate wife and family then shuffled Dulaine's mistress off to Paris to avoid scandal.

Clio has returned to New Orleans bent on revenge, and is determined to socially embarrass and humiliate the legitimate Dulaines as much as she can. Her plot is complicated, however, when she meets a Texas gambler, Clint Maroon (Gary Cooper). Clio falls hard for the taciturn Clint, but she still wants to find a rich husband so she can have security and respectability.

After completing the embarrassment of the Dulaines, Clio follows Clint to the rich folks haven of Saratoga Springs, NY. While still lusting for Clint, she sets her cap for Bartholomew Van Steed (John Warburton), rich, gullible, and the owner of a railroad.