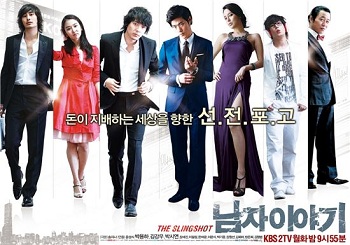 The Slingshot (남자 이야기), aka Story of a Man, is a Korean Series (20 episodes) about corporate intrigue, murder, and revenge.

Kim Shin (Park Yong-ha) is a rich young playboy, the younger son of a family that operates a dumpling factory. He's content to mark time with his gorgeous girlfriend Seo Kyung-ah (Park Shi-yeon), until tragedy strikes in the form of a television news report accusing his family of putting unsafe ingredients in their dumplings. The charges are false, but the family business goes into bankruptcy anyway. His responsible, hardworking older brother, Kim Wook, is ruined, and kills himself. Kim Wook's widow and daughters are driven to a life of poverty, pursued by loan sharks looking to get back money that Kim Wook borrowed to try and keep the business afloat.

Kim Shin tries to save his sister-in-law and nieces but a bad decision (assuming the loan shark debts himself) and a rash act (attempting to hijack the television studio that ruined his family in order to tell his family's side of the story) land him in prison for attempted murder. There he finds out that the villain of the story is Chae Do-woo, only son of construction magnate Chae Dong Soo. Do-woo is building his own financial empire by underhandedly ruining other companies (like the Kim family dumpling business) and buying them on the cheap. When Kim Shin is paroled from prison, he emerges determined to wreak his revenge on Chae Dong Soo and Chae's family business, Chae Dong Construction, which Shin (mistakenly) thinks was behind the whole plot.

Meanwhile, Seo Kyung-ah has become a courtesan in order to pay off Shin's family's debt.