Literature / There's a Wocket in My Pocket! 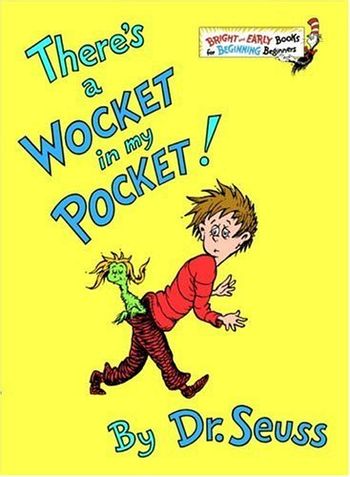 "Some of them are very friendly. Like the Yot in the Pot. But that Yottle in the Bottle! Some are friendly. Some are NOT."
Advertisement:

There's a Wocket in my Pocket! is a 1974 children's rhyming book by Dr. Seuss. Each page has a picture of a strange imaginary creature with a nonsense name which rhymes with its hiding place, as in the title. As it says, "some are friendly, some are not."

Considering that Seuss' books under this imprint were for years shackled with short and strict vocabulary lists, this book is an obvious Take That! of the talent enjoying the freedom to write as he wanted.