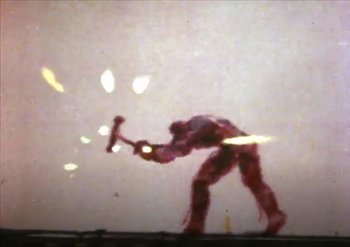 The Legend of John Henry is a 1974 animated short film (11 minutes) directed by Steven Weiss.

It is one of many adaptations of the John Henry myth. John Henry is a steel-drivin' man, with a wife named Polly and a baby. As a child he pounded the rails with his hammer, and when he grew up he became a railroad worker. One day, the railroad John was working on came up to a mountain. The railroad bosses decide that the train must go through the mountain, and so John Henry and the rest of the crew go to work. When the bosses, unsatisfied with the pace, decide to employ a steam drill to drill through the mountain, John Henry takes it as a personal challenge, and decides to beat the machine.

Other animated shorts based on John Henry include John Henry and the Inky-Poo and Disney's John Henry.