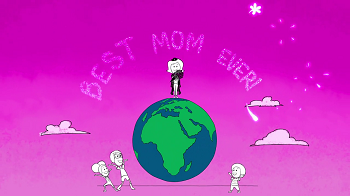 Original release date: June 25, 2021
Written by: Chuck Tatham
Directed by: Tom King
♫ We're gonna give her the world
And every little anything that she deserves
We are gonna blow her frigging mind ♫
—Owen, "All About You"
Advertisement:

During Mother's Day, Owen, Molly, and Cole try to give Paige the best day ever with Owen taking Paige for a walk in the park but uncovers a secret scavenger hunt and Molly and Cole try to find the perfect gift. With Helen taking a day off, Bitsy makes her hotel bartender quit because of her attitude.

♫ She goes beyond and above
The best to ever do it in the history of moms
All that plus nine months without wine
365 days all you think about about is everybody else
But today is all about you ♫
—Owen, Molly, & Cole, "All About You (End Credits)"
Feedback

Paige sings about how she hopes her kids promise to always be her sweet, little babies when they get older.

Paige sings about how she hopes her kids promise to always be her sweet, little babies when they get older.