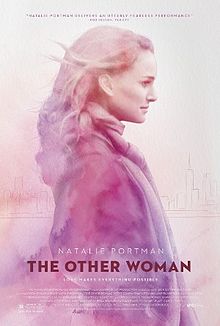 Love makes everything possible.
The Other Woman is a 2009 film starring Natalie Portman, Lisa Kudrow, Lauren Ambrose, and Scott Cohen, based on the novel Love and Other Impossible Pursuits (which is also the film's title in the UK). Natalie Portman plays Emilia, a woman who falls in love with Jack Woolf (Scott Cohen), a high-powered attorney at the firm at which she's working.
Advertisement:

In short order, she and Jack start an affair which ends with Jack leaving his wife, Dr. Carolyn Soule (Lisa Kudrow), for her. Emilia and Jack's marriage is complicated by her difficulty in relating to her new stepson, William; frequent conflicts with Dr. Soule, and the spectre of the death of Isabel, Emilia and Jack's baby who died three days after her birth.

Not to be confused with the 2014 comedy with Cameron Diaz and Leslie Mann, if that's possible (or the several other movies with that title).