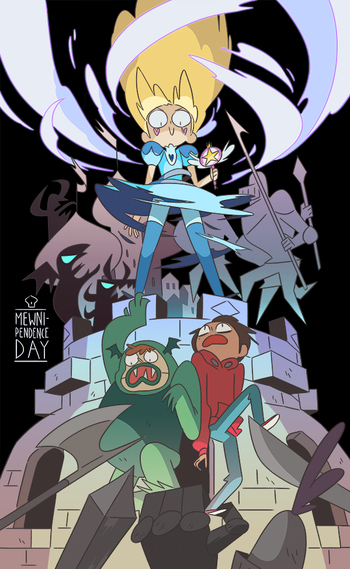 Star gathers her friends together to celebrate Mewnipendence Day, the day when the first settlers of Mewni defeated the monsters infesting the land. She divides the guests into human and monster teams, giving the humans armor and weapons but leaving the monsters to fend for themselves. Marco brings up how unfair this seems, using Star's educational pop-up book as an example. Meanwhile, Toffee shows off a mini-portal they can use to teleport Star's wand directly to Ludo. Buff Frog, not trusting Toffee, volunteers to go to Earth himself. However, the portal doesn't work when Buff Frog tries to use it, causing Ludo to fire him. Star leaves food out for him after seeing him depressed sitting in a tree.