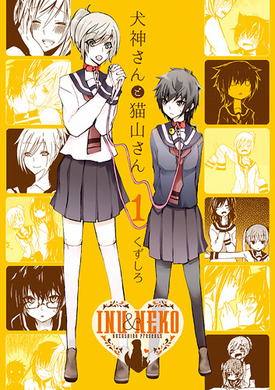 Who says cats and dogs don't get along?
Advertisement:

Suzu Nekoyama is a dog-loving cat-like girl who meets the cat-loving dog-like Yachiyo Inugami, the two fall for one another instantly. Now join them and their owner/friend, Aki Hiiragi, as they meet more weird members of their school.

A Yonkoma yuri manga that focuses on a cast of characters who really live up to their names.

An anime adaptation aired in Spring 2014, consisting of twelve three-minute episodes and a four-minute OVA.