This is a page about the characters appearing in the Anime Voltes V. Just as a warning, this page probably contains spoilers. 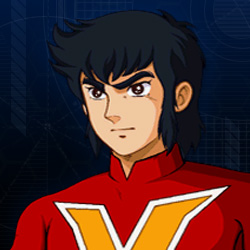 The team leader of Voltes Team and piloting the Volt Cruiser, forming the robot's head, and the eldest child of the Gō family. As a child, Kenichi used to be an adventurous child, but after the departure of his father, he changed his attitude into that of a responsible big brother for his siblings. He grows up into a Motocross champion while being an excellent marksman, but heeding his father's last words, he knows his destiny is to lead his siblings and teammates to protect Earth from the invasion of Boazanians. 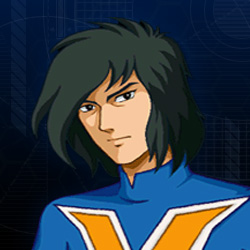 The second-in-command of the Voltes Team, piloting the Arms section of the robot, the Volt Bomber. A Japanese orphan that grew up alone in America due to his mother dying to protect him from a pack of wolves, and then his father shortly followed. Even so, Ippei managed to make a career of a rodeo champion thanks to the companionship of his beloved horse Eiffel. Until one day he's suddenly plucked out from his life as a rodeo champion by the Big Falcon to serve as one of the defenders of humanity by being a part of the Voltes team. Ippei is a bit bitter and cynical at this sudden change of life, causing him to bicker a lot with the team leader Kenichi, but nonetheless he still gives his all to defend humanity and grows to respect his new friends. Defense tactician of the Voltes Team, piloting the Volt Panzer that forms the robot's body chest. Despite his big stature, Daijirou is actually the second son of the Gō family. Formerly a playful boy, the disappearance of his father changed him, and afterwards, he was sent to a country to learn many forms of martial arts. When he returned, he's already mastered many fighting styles with his favorite Weapon of Choice being the naginata. Like his brothers, he further trained himself to eventually engage in the battle for humanity against the Boazanians. The young genius and mechanic of the Voltes Team, piloting Volt Frigate which formed the legs of Voltes V. The youngest of the Gō siblings. For his brothers, he'd always be the child who never felt the warmth and love of a real father. Despite his hurdles, however, he's gifted with a brilliant mind, keen eyes for gadgetries, which landed him the role of a technical handyman and repairman when he's not piloting. He still knows his role for humanity and prepares his body and mind for the day to fight the Boazanians. 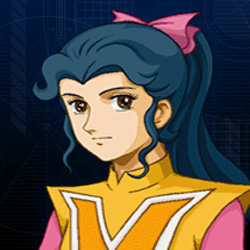 Heir to the Koga-Ryu ninja style and daughter of General Oka of the Earth Defense Force, as well as the pilot of Volt Lander, forming the feet of Voltes V. Megumi has trained in the arts of ninjutsu since childhood and set to inherit her ninjutsu dojo. She's also learned gentleness from her mother, which tends to translate to trying to mediate for the team, especially when Kenichi is being too hard-ass for his own good and either overly scolds Hiyoshi or gets into an argument with Ippei. Since her father is a commander of the Earth Defense Force and co-designed Voltes V itself, Megumi is also trained to take her place amongst the Voltes Team and to fight against the Boazanians and protect mankind. 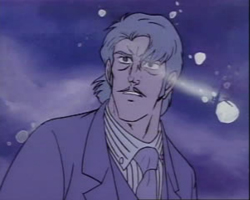 The father of the Gou brothers. He went missing after warning about the invasion of Boazanians. But as the series goes on, his true identity unravels to the surprise of many: He's actually Prince LaGour of the Boazan, but born hornless, considered an abnormality for his people. Despite so, he's still the Wise Prince of his people, wearing fake horns until that fact was exposed by his jealous and ambitious cousin Zu Zambajil. For that, he's branded a traitor and had to escape to Earth, with the knowledge that Zu Zambajil will set his sights to Earth. Additionally, he had a wife in Boazan that died in childbirth, and the son he had would be known as Prince Heinel. 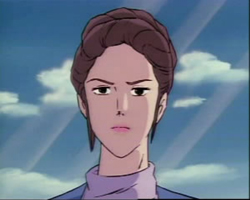 The human wife of Dr. Kentarō Gō, the mother of the Gō brothers. She co-designed Voltes V with her husband, Professor Hamaguchi and General Oka, and eventually saw her husband leaving and going missing, while warning her that the Boazanians will come to invade. For that, she had to train her children to prepare for the day of reckoning as warned by her husband. Despite her harsh attitude, she cared for her children, willingly giving her life to protect them. 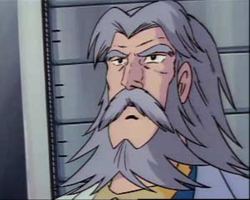 He is the commander of Camp Big Falcon fortress at the beginning of the Voltes V series. He helped design and build the Voltes V robot and is a good friend of Prof. Gō. He is somewhat a father figure to the Voltes team, especially to the Gou brothers due to his relationship with their father. He managed Big Falcon on Prof. Gō's behalf until he was killed saving Voltes V.

A protege of Kentaro and Hamaguchi that only appeared halfway of the series, shortly after Hamaguchi sacrificed himself. He's a very strict commander that nevertheless still had the best interests of the team and the defense of Earth.

The leader of the Boazan Empire, Emperor Zambajil was the bastard child of the previous Emperor before clawing power away from the rightful heir. Under him, the Empire has become conquest hungry and cruel, treating other races as bugs to be squashed.

The primary antagonist that the Voltes V team faces, Prince Heinel was sent by his uncle the Emperor to conquer the Earth.
Katherine Rii

One of Prince Heinel's direct underlings, she cultivates the life-forms that the scientists use to make Beast Knights, occasionally taking a command position. Although she has no issue with the invasion, by the end of the series, she tries to convince Heinel to give up on the empire and run away with her instead. She is deeply in love with Heinel despite refusing to say it directly, and her deep concern for the Prince's safety saves his life several times through the series.
Jangal Rui

The main military commander of Heinel's forces on earth, he usually leads the Beast Knights into battle and surveys the field from the combination space ship/skull castle, Skull Rook. Though not the most intelligent of commanders, he does try a variety of tactics throughout the series and comes up with a plan to confirm whether or not the Gou siblings are truly half Boazanian, thanks to some of Katherine's bacteria. He is highly loyal to Heinel. He is also notable for being the only Boazanian depicted with three horns, although whether this means anything is uncertain.
Zuhl

An elderly underling of Heinel who is in charge of scientific development. He is direct designer for most of the Beast Knights in the first half of the series. He is secretly spying on Heinel as part of the emperor's plots, and greatly despises the prince for being what he views as a young upstart. Much of the center part of the series revolves around his schemes to keep Professor Goh secretly imprisoned so that he can take advantage of his knowledge and create a robot that can defeat both Voltes V AND Heinel, earning him respect in the empire. Heinel, for his part, views him as craven and somewhat useless - once dismissing him as "barely a noble". This is perhaps due to the fact that he only has a single horn. Eventually his schemes are revealed and he is executed by Heinel while pleading for his life.
Belgan

A replacement science officer who shows up not long after Zuhl's death. He is responsible for the Armored Beast Knights who appear in the second half of the series, having invented a powerful new armor material that the Voltes is unable to damage at first. He wears his own set everywhere, and proudly demonstrates its efficacy against an attack by Heinel's guards during his first appearance. Like Zuhl, he is secretly working for the emperor and seeks to gain fame by taking Heinel's place. However, he quickly recants that position after his first loss to Voltes V and begs forgiveness, which Heinel accepts... only for him to betray him again at the very end of the series and try to seize power with General Gururu.
General Gururu

A general back on Boazan who transmits Heinel's reports to Belgan. Very late in the series, he arrives on Earth himself to kidnap Dr. Gou and attempts to have Heinel killed. Despite his high-ranking position in the Boazanian military, he is somewhat cowardly and greatly terrified of taking part in actual combat himself. Both he and Belgan are eventually killed by Voltes V commanding a battleship in the final battle on Boazan.