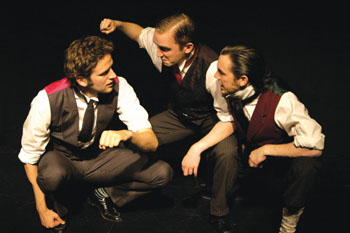 The Penny Dreadfuls Present... is a radio comedy series written and performed by British sketch troupe The Penny Dreadfuls. Actor and stand-up Miles Jupp is also a regular. Two series of four episodes each were broadcast on BBC Radio 7 in 2008, followed by three forty-five minute specials on Radio 4 in 2009, 2011 and 2013.
Advertisement:

The series chronicles the lives of the fictional Brothers Faversham, nine men who 'straddled the Victorian era like a mighty change-Titan.' (Twins Perceus and Lucius share an episode between them.) Each episode also features miscellaneous material, such as spoof adverts. The exceptions are the specials, which take place in other historical settings:

The specials and the Brothers Faversham episodes are often viewed as separate shows, due to their different subject matter and home stations, but the British Comedy Guide regards them as the same.