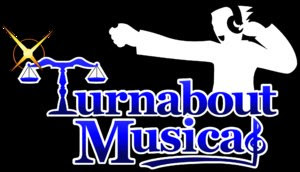 This really is a colossal waste of time.
"So, will this Phoenix take flight off the ground?
I'll soar with glory, my story will be renowned!
Now, let's get this trial underway!
My courtroom premiere!
I will persevere!
I'm here on this clear
August day!"
— Phoenix Wright, "August Day"
Advertisement:

posted on the Court Records Ace Attorney fan forum. Said idea then exploded into a revolution.

Turnabout Musical is a fan-made musical based on Phoenix Wright: Ace Attorney. It follows the story of the first game, and the writers have tried to adapt it as faithfully as possible. The complete soundtrack (with the exception of the final song, "Dawn of a New Trial") is available on the project's website.

On December 18, 2016, the group Nostalgification

performed a truncated version of the musicalnote Unedited, the play runs about 6 hours. In order to bring it down to a manageable run-time, several edits were made, including the complete removal of case 3. and posted it to their YouTube channel

. You can see the final multicam edit with full credits here

. A second live recording, of Albino Squirrel Productions’ 2021 performance at the Phoenix Theater, can be found here

On May 10, 2019, the first edition of the Turnabout Musical Production Package was released, seen here

. In support of a new generation of fans showing interest in the project, an effort was made to collect every existing piece of media related to the project, including full scripts, sheet music, demos, storyboards, and more. The package is planned to be updated as new content is found and released.

Matthew Taranto (TriforceBun) is the voice of Phoenix Wright, major songwriter and composer for the project and has since become the creator and head writer of Brawl in the Family as well as creating and releasing a musical video game, Tadpole Treble. Lucia Lobosvilla (Pleading Eyes), the project co-head and voice of Maya Fey, wrote for Avatar: The Last Puppetbender

and has since gone on to create an original audio drama.

The project was a massive undertaking and involved many dedicated and talented fans and friends to create the original show for the web format, with a total of no less than nineteen songwriters, many of whom wore multiple hats in the other creative departments on the project. Some of them contributed to as few as one or two songs, but others help to define the show's sound, such as TriforceBun.

It has inspired the Ghost Trick Musical

, which is officially the sister project of this, and the Apollo Justice Musical

, an unrelated production based on the fourth game in the series.

This colossal waste of time provides examples of: