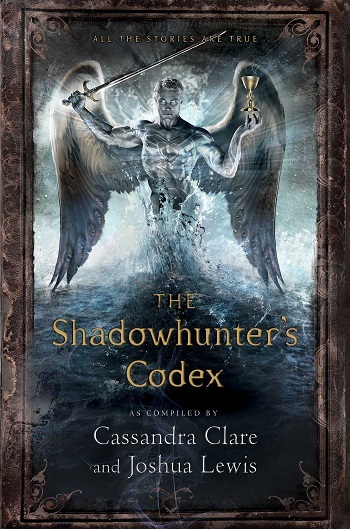 The Shadowhunter Codex is a guidebook to the world of The Shadowhunter Chronicles written by Cassandra Clare and Joshua Lewis. It is a Defictionalization of the Codex mentioned in The Mortal Instruments and The Infernal Devices. It was released on October 29, 2013, during the gap between Clockwork Princess and City of Heavenly Fire.
Advertisement:

The Codex is basically an encyclopedia about the Shadowhunter world. It contains a lot of information about things like Shadowhunter culture, Downworlders, demons, magic, weapons and combat, Idris and the history of Shadowhunters.

But this isn't just any copy of the Codex. It is actually Clary's book and she, Jace and Simon have written all kinds of commentary in the book.