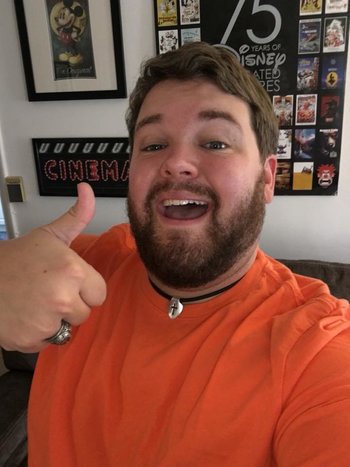 One man. Hundreds of voices. Millions of laughs!
Advertisement:

Brian Hull (born August 28, 1991) is an American voice actor and YouTuber. He got his start by singing "Let It Go" with a lot of Disney voices

on his YouTube channel and from there has climbed his way as a Disney YouTuber and even having voice acting, with his most popular videos being his voice impressions with characters in the Disney Theme Parks in Disneyland, Walt Disney World, and even Disneyland Paris.

He also does the Bippity Boppity Bros podcast with his friend and fellow Disney fan Paul (last name unknown to many but Hull himself), and has been a mainstay in different Pup Star movies.

To hear his voice impressions, his YouTube page is here.

accounts. Now also has his own Twitch account here!

(And also has one with his friend Paul under Life is A Bowl of Cashews.

Voice roles that Mr. Hull have done include:

"Hello my Hullimaniacs out there, welcome back to [the] page, it's so great to see these tropes!"