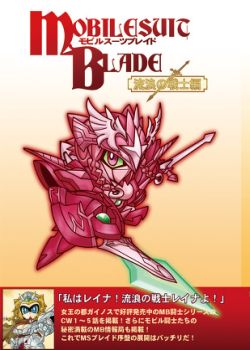 The beauty of Queen's Blade. The power of Gundam!

What happens when you mix the fanservice antics from the heroines from the Queen's Blade franchise (and also Fate/stay night and Magical Girl Lyrical Nanoha) with the Darker and Edgier plots of the Gundam franchise? While being in Super-Deformed?

This doujinshi, written by Pixiv artist @mino (pronounced as "Amino") is basically a very weird recap of the first season of the Queen's Blade anime (the Rurou no Senshi one) while depicting the heroines as Super-Deformed Mobile Suit versions of themselves and mixing Saber, Nanoha Takamachi and Fate Testarossa to the fray. Each heroine is depicted as a different MS from a different series of the Gundam franchise:

You can read it in the artist's Pixiv page

, (registration required and some art can be NSFW, but the doujinshi itself is relatively tame compared with the original series who is based of)note For the beginners, there's no sex scenes and very few Fanservice scenes, and no nudity, despise being a doujinshi.