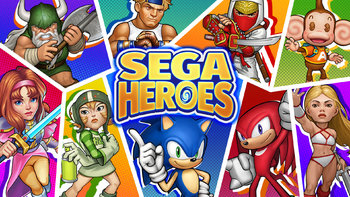 Sega Heroes was a Massively Multiplayer Crossover Role Playing Match-Three Game released for iOS and Android. It was shut down on May 21st 2020 due to Sega and the developer Demiurge parting ways.

The dimensional conqueror Dremagen has attacked the worlds of various Sega franchises, recruiting their villains to join her legions, and it's up to the player to save the day.

The game included the following franchises and characters:

Tropes associated with Sega Heroes are: