A list of characters who appear in the Psychic Force series. 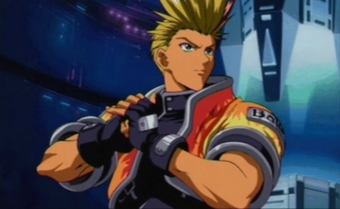 Voiced by: Mitsuaki Madono (JP, Game), Tomokazu Seki (JP, OVA)
The main protagonist of the series. A young Hot-Blooded American Psychiccer man who works as a member of Anti-NOA and is the Psychiccer of Fire. Burn happens to be an old friend of Keith and wants him to abandon his extreme ways. Even though he went missing after the events of the first Psychic Force, Burn had soon re-emerged in order to stop the plans of both Neo NOA and the Army. Burn's also continuing his own personal mission of convincing Keith to give up the idea of creating a utopia for Psychiccers.
Advertisement:
Wendy Ryan 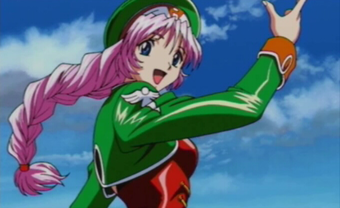 Voiced by: Kyoko Hikami
A young happy and upbeat Australian Psychiccer girl who works as a member of Anti-NOA and is the Psychiccer of Wind. Wendy tends to act like Emilio's Cool Big Sis in order to help him out. Wendy is also on a personal mission to find her missing older sister Chris. The sequel would find Wendy now searching for both Burn and Emilio after the two of them had went missing following the events of the first Psychic Force, while still looking for her sister. Though she didn't realize until the end that she has met her as the combat android of NOA Sonia.
Emilio Michaelov 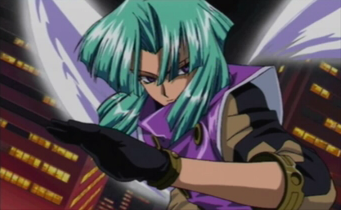 Voiced by: Minami Takayama
A young frightened Russian Psychiccer boy who works as a member of Anti-NOA and is the Psychiccer of Light. Emilio is introverted and fearful of his own power. The sequel would find Emilio now working for Wong's Army, having been brainwashed into some sort of Ax-Crazy boy. However, Emilio's good self still struggles to emerge. 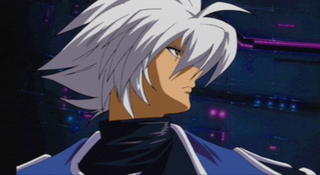 Voiced by: Kyosei Tsukui
A young cold and calculating British Psychiccer man who serves as the leader of NOA and is the Psychiccer of Ice. Despite his extreme ambitions, Keith comes off as being a very charismatic person and manages to attract one of his followers, Sonia. Keith's main goal is to create a perfect utopia for Psychiccers and that he seeks to recruit and convince his old friend Burn to help him out in his quest. The sequel would still have Keith being the leader of NOA (now renamed as Neo NOA) as he continues his conquest in creating a Psychiccer-only utopia. Although with Wong defecting and forming his own Psychiccer organization called The Army, Keith got a new opposition that even disgusts him.
Sonia (Chris Ryan) 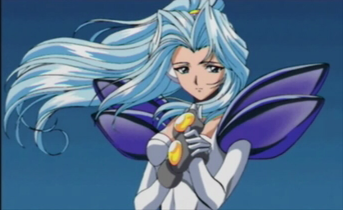 Voiced by: Ayako Shiraishi
A young mysterious blue-haired Psychiccer woman who works as a member of NOA and is the Psychiccer of Electricity. Sonia harbors a crush on Keith, and is hinted to be rather robotic. Turns out that Sonia is actually Wendy's older sister Chris Ryan, who was kidnapped and rebuilt as an android by Wong.
Advertisement:
Brad Kilsten 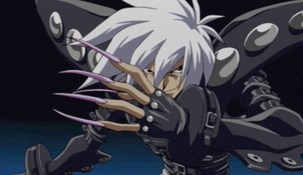 Voiced by: Ryusei Nakao
A young mental German Psychiccer man who works as a member of NOA and is the Psychiccer of Gravity while having a Split Personality disorder. At one point, Brad's a gentleman who scoffs at fighting, but let him see some blood and he'll turn into an Ax-Crazy Psycho for Hire.
Carlo Belfrond 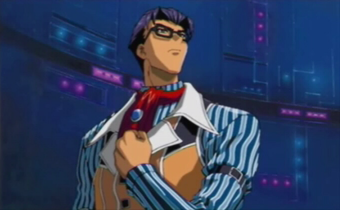 A sharp-dressed and intellectual Psychiccer man who works as a member of Neo NOA and is the Psychiccer of Water. Carlo is Keith's new subordinate in Neo NOA and supports his goal of a Psychiccer-only world.
Regina Belfrond 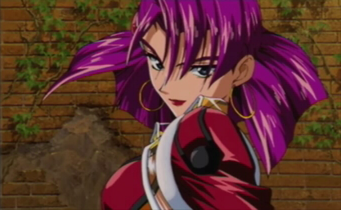 Carlo's little sister who works as a member of Neo NOA and is the Psychiccer of Fire, but NOT Burn's successor. Other than serving Keith as a member in Neo NOA and supporting his ambition, Regina seeks to impress her older brother as well.
Advertisement: 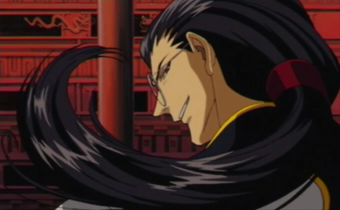 Voiced by: Mitsuaki Madono
A bespectacled Hong Kong Chinese Psychiccer man who was once a member of NOA and is the Psychiccer of Time. Wong had usually served as Keith's consultant and strategist, but is one hell of a Chessmaster, manipulating everyone and everything for his own personal gain. Upon severing all of his ties to NOA and establishing himself as the leader of his own Psychiccer organization called The Army, Wong seeks to topple both Keith and Neo NOA so that he can advance his own goal of world domination. Possibly the Big Bad of the entire series.
Gudeath 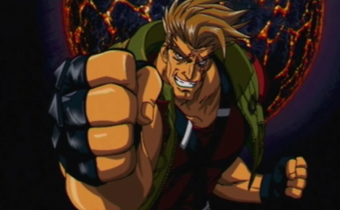 Voiced by: Ryuzaburo Otomo
The successor of Brad, in which he's the Psychiccer of Gravity despite being so slow. Gudeath works as a member of Wong's Army and thinks that the world has no need of the weak and is out to eliminate weak Psychiccers.
Setsuna 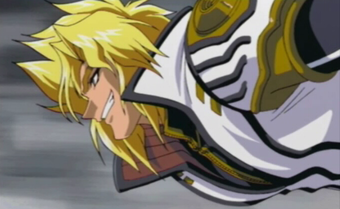 A short-tempered Bishōnen who works as a member of Wong's Army and is the Psychiccer of Darkness. However, like Wong to Keith previously, Setsuna wants to usurp Wong's place and take control over The Army. 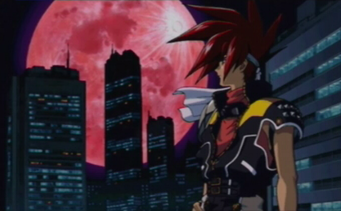 Voiced by: Hikaru Midorikawa
The second protagonist of the series and the successor of Sonia, in which he's the Psychiccer of Lightning. Might is a Psychiccer Hunter who makes a living by hunting down and killing all other Psychiccers.
Patricia "Patty" Myers 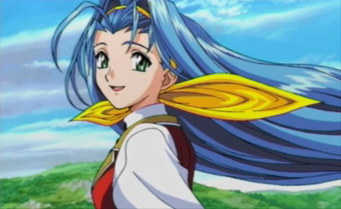 Voiced by: Motoko Kumai
Nicknamed "Patty", she is Might's closest friend (but it's not quite known if she's also a Psychiccer Hunter) and is the Psychiccer of Tones.
Rokudo Genma 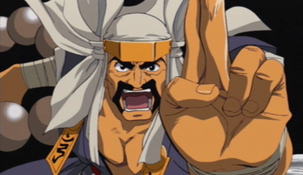 Voiced by: Yosuke Akimoto
A Japanese Yamabushi monk/priest magician who's unaffiliated with any of the conflicting forces and that he uses Shugendo monk magic. Genma is convinced that psychic power is a double-edged sword not meant for use by normal humans, thus he's trying to rid the world of all Psychiccers.
Genshin Kenjoh 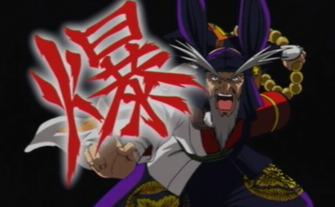 The successor of Genma and very much identical to him. Genshin is a Japanese Yamabushi monk/priest magician who uses Shugendo monk magic and tries to rid the world of the "supposed evil" that is the Psychiccers. Genshin is also on a personal mission to help rescue a young Japanese Yamabushi girl named Shiori from Wong and The Army.
Shiori 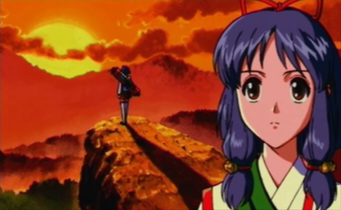 A young Japanese Yamabushi girl who is said to be The Chosen One of the Shadow Plateau: a sacred and religious place where both Genma and Genshin come from and that Shiori herself is destined to help save and lead the world from its current ruin and destruction. Upon learning and knowing of her hidden power, Wong and The Army kidnap Shiori in the hopes of harnessing that power for their own malevolent ends, forcing Genshin to embark on a rescue mission in order to save Shiori from the current danger.
Gates Oltsman 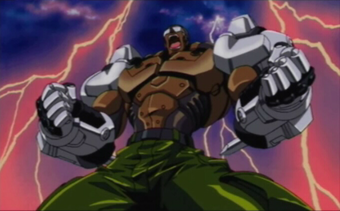 An American cyborg who's unaffiliated with any of the conflicting forces and that he fights with the various armaments and upgrades of his cybernetic body. An unexpected Psychiccer attack had severely injured Gates and killed his wife Cheryl and daughter Tina, thus he became a cyborg in order to get his revenge against all Psychiccers. The sequel would find Gates unexpectedly working for Neo NOA after Keith captures and reprograms him. Gates' ending in the previous game was canon too: Keith was actually the one behind his family's massacre, but Gates didn't know about this when he was being brainwashed.