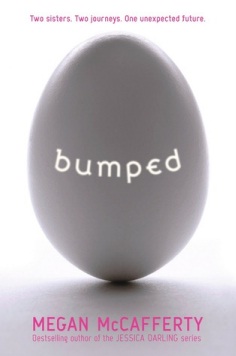 Bumped is a 2011 novel by Megan McCafferty. When a virus makes everyone over the age of eighteen infertile, would-be parents must pay teen girls to conceive and give birth to their children, making teens the most prized members of society. Sixteen-year-old identical twins Melody and Harmony were separated at birth and had never met until the day Harmony shows up on Melody’s doorstep. Until now, the twins have followed completely opposite paths. Melody has scored an enviable conception contract with a couple called the Jaydens. Harmony has spent her whole life in religious Goodside, preparing to be a wife and mother. She believes her calling is to convince Melody that "pregging" for profit is a sin. But Harmony has secrets of her own from which she seeks to escape.
Advertisement:

A sequel titled Thumped was released in 2012.