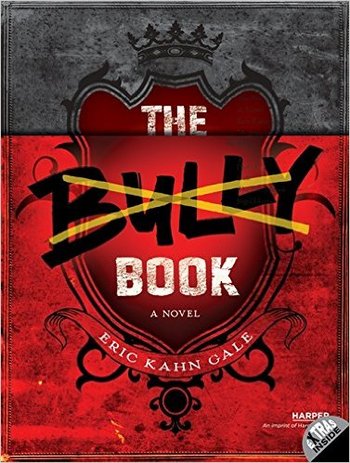 The Bully Book is a novel by Eric Kahn Gale

The story of The Bully Book is told in chapters that alternate between passages from the actual Bully Book and entries from 10 year-old Eric Haskin's journal. As the novel progresses, the two documents inform each other and their relationship is made clear, while Eric grows ever closer to The Bully Book and the dark secret at the heart of Arborland Elementary School.

There is a book that teaches how to be a bully, and it will ruin Eric's life. It all starts when his best friend, Donovan, ditches him and befriends Adrian Noble, the tallest kid in class, and a karate-kicking ten-year-old Eric calls Jason Crazy-Pants. The three boys systematically tease and humiliate Eric, eventually turning the entire class against him. When even that isn't enough, they sabotage the friendship of his grade-school crush, Melody Miller.

How did 5th grade go so wrong so fast? Adults offer little help: Eric's single mother doesn't listen, and Tony Clark, the school's principal, misinterprets every situation. In a chance encounter with a 6th grade loser, Eric learns of a school-district-wide conspiracy theory: "The Bully Book." According to local legend, a devious 10-year-old wrote a Machiavellian manifesto for the 5th grade, instructing its readers how to gain power in the school. The Bully Book's linchpin is the selection of a "Grunt"—the kid who will become "the lowest of the low." The Grunt unites the class around a common goal (making his life miserable) and gives the possessor of The Bully Book a platform on which to demonstrate his dominance. The Grunt is selected through a specific, but mysterious process. Eric believes that discovering the specifications used to determine the Grunt will allow him to change himself in the necessary way, and escape The Bully Book's all-encompassing grasp.

Eric becomes a detective of The Bully Book, seeking out its former Grunts in the middle school, perusing historical documents, and even coming into possession of a single page of the storied text. Meanwhile, the world is growing up around him. Melody begins "going out" with one of his key tormentors, Jason Crazy-Pants, and his mother carries on a relationship with Tony Clark, his principal.

The Bully Book provides examples of the following tropes: