Recap / HTF - Water You Wading For 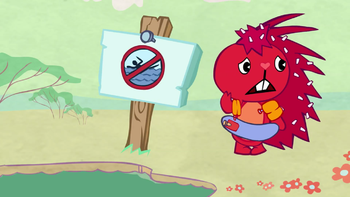 "Water You Wading For" is the sixth episode of the first (internet) season of Happy Tree Friends.

The episode begins with a happy Cuddles who cannonballs into a lake. After swimming for a bit, he asks his porcupine friend, Flaky, to join him. However, the porcupine points out the "no swimming" sign, which is outright ignored by the bunny. Soon, piranhas attack Cuddles, a pair of sea lions play him as if he is a ball, an alligator bites down on him, then finally, a whale crushes what is left of him. All while the highly cautious porcupine being unable to properly help him. It ends with Flaky laughing nervously after using a life preserver on Cuddles's pool of blood.

"Water You Wading For" contains the following: