Webcomic / What Does The Fox Say 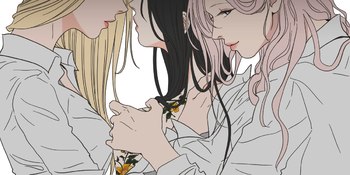 Seongji, Sumin, and Seju; the members of the Love Triangle

Sung Sumin is the team director of Hello Studio, a game development company. She's short, blunt, and has a string of casual affairs. Baek Seju is Hello Studio's president, who also happens to be Sumin's ex-girlfriend. Although the two aren't dating, they sometimes get together for casual sex.

Enter Ju Sungji, the newest addition to Sumin's team. She draws Sumin's interest, and Sumin wonders if she can manage to bed the newbie for kicks. This results in a Love Triangle in which Sumin falls in love with Sungji, but with Seju still pursuing Sumin. The webtoon has lots of drama and NSFW sex scenes.

. It has been deleted from there since then, but it is now being published in English by TappyToon

Not to be mistaken with the song by Ylvis.

What Does The Fox Say contains examples of the following tropes: