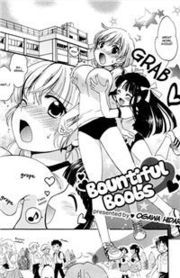 Bountiful Boobs is a one shot manga created by Ogawa Hidari in 2009. It stars two girls: Kozue and Erina. Erina loves to grope Kozue, and only feels okay when her friend has a sports bra... however, the PE teacher is worried. If Kozue keeps wearing a sports bra, her breasts will sag. But if she does switch to a wire bra, her friend might stop groping her...