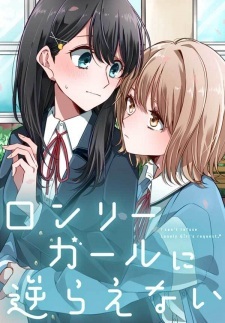 Sakurai Ayaka has always wanted to be like her older brother, a university student working hard to become a teacher. While an intelligent honor student, Ayaka tends to choke when taking exams, resulting in her going to a different high school than her brother. After becoming class president, her teacher, Ms. Egawa, asks Ayaka to get truant student Honda Sora to attend school in exchange for a glowing letter of recommendation to her university of choice. Determined to not fail an entrance exam because of nerves again, Ayaka agrees and visits Sora's house to convince her classmate to go to school.

Unfortunately, Sora becomes aware of the deal between Ayaka and Ms. Egawa and uses that as a means of getting Ayaka to fulfill her demands in return for going to school.

Can't Defy The Lonely Girl, also known as I Can't Refuse Lonely Girl's Request or Lonely Girl ni Sakaraenai, it was written and illustrated by Kashikaze and appears in the Comic Yuri Hime magazine.