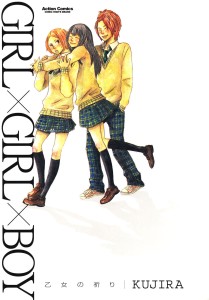 "Itta, who I've known during my childhood and bullied me said he likes me. I, Fuuka was saved from Itta by Riri-chan and even though she's a girl, I like her. Riri-chan who I had a brief relationship with likes Itta. It's a circular love triangle."
—Fuuka

When Fuuka was bullied as a little girl, a tomboy named Riri often came to her rescue. The two become close friends over the years with Fuuka developing romantic feelings for Riri. Riri and Fuuka grew closer and even started a brief romance.

The romance between Riri and Fuuka however, is cut short when Riri insists that they stop because Riri now likes a boy. The boy is Itta who bullied Fuuka when they were younger. Things get more complicated when the next day Itta comes to Fuuka and confesses that he likes her (the reason he bullied her). This forces Riri's confession to Itta. The question now is how will this love triangle get resolved?

Girl X Girl X Boy is a one volume romance manga by the author KUJIRA. It was originally serialized in the magazine Comic Seed!.

Tropes found in this manga include: