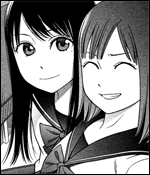 Prism is a Yuri Genre manga by Higashiyama Shou, the author of Stretch.

After a one-day romance with a boy named Hikaru during her last year of grade school, Megu went through middle school without any romance. Now entering high school, she's ready to move on with her love life. At school, she meets a pretty girl who abruptly gives her a big hug... Hikaru?!

The manga was quietly canceled and pulled from shelves partway through its second volume over allegations of tracing (which appear to have been substantiated).