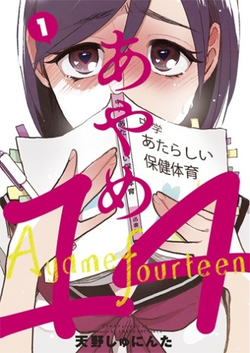 Ayame 14 is a Slice of Life Yuri Genre manga by Shuninta Amano, which was serialized in Comic Yuri Hime from 2014 to 2016 and compiled into three volumes.

The story focuses on the fourteen-year-old Ayame Daichi and her three best friends, as they encounter the rapid changes and challenges of adolescence.