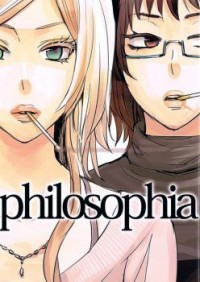 Philosophia is a Yuri Genre Slice of Life manga by Shuninta Amano. It follows the story of Ai, a beautiful, diligent, but antisocial college student, who finds herself bonding with a fellow student named Tomo—a strange young woman who doesn't seem to be interested in anything but smoking, reading books, and maintaining the status quo in her life.

Readers beware that Philosophia is, by a wide margin, Shuninta Amano's darkest and moodiest work to date. You Have Been Warned.