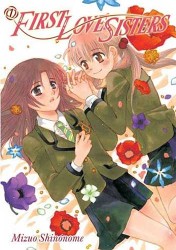 When Matsuzato Chika was in middle school, she took a tour of the famous Tsunojyo Girls' Academy. There she met Kizaki Haruna, a beautiful girl who guided her around the school and showed her much gentleness as well as kindness. Haruna also gives Chika a handkerchief saying that Chika can give it back when she gets admitted to Tsunojyo. Being motivated by that moment, Chika strives to study hard in order to pass Tsunojyo's entrance exams.

A year passes and Chika is attending her first day at Tsunojyo. She makes a new friend, Akiho, whom she tells about the promise made a year ago. Eventually, Chika runs into Haruna in the hallway but something's wrong: Haruna gives her the cold shoulder, by walking off and deliberately ignoring her. What happened to the kind and gentle sempai that Chika spent time with a year ago?

First Love Sisters, also known as Hatsukoi Shimai, is a Girls' Love manga originally debuting in the Shōjo magazine Yuri Shimai. Although a fairly typical yuri genre manga, it still holds its own as a quality piece of work.

Seven Seas Entertainment published the first volume in English but then put the series on hold in October 2008 due to "rights issues".