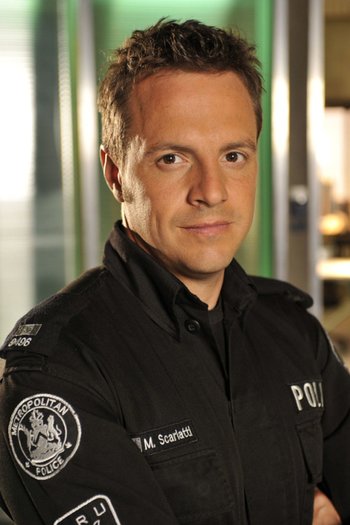 While his roles in Canadian film and television are extensive, Sergio Di Zio is best known for appearing in CTV's hit police show Flashpoint, where he plays the team's jokey and optimistic technical analyst "Spike" Scarlatti (who shares his Italian ancestry). He's also well known for appearing in the 2007 crime film The Lookout as the goofy, donut-loving sheriff's deputy Ted. Other notable roles of his include Marcus Weekes on the 2005 legal dramedy series This is Wonderland, Jackie Whynacht in the 2007 dark comedy film Just Buried, and student body president Steve Nisser in the 1995 comedy movie National Lampoon's Senior Trip

Sergio Di Zio has also done voice acting for Canadian cartoons, particularly those from Fresh TV and Nelvana. With the former, his most notable roles are the wacky inventor and keyboardist Kin Kujira on the 2013 musical-comedy Grojband, as well as gassy, mischievous Australian surfer Ripper and Butt-Monkey orca mascot Wipeout on the 2009 animated sitcom Stōked. With the latter, his most prominent characters are the loyal but greedy and egotistical talking seabird Puffin on the 2018 surreal urban fantasy Wishfart and the laidback, friendly school janitor Louis on the loose 2007 Animated Adaptation of Wayside.