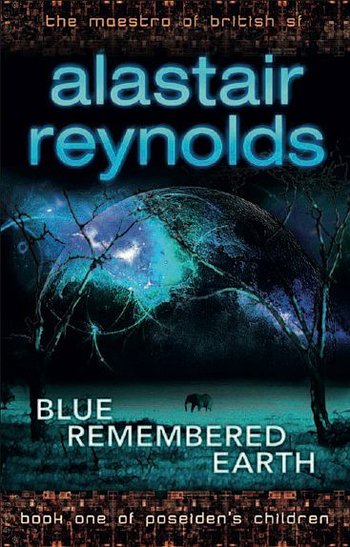 Blue Remembered Earth is the first novel in the Poseidon's Children trilogy, by Welsh Hard Sci-Fi author Alastair Reynolds. Set in a future Africa during the 2160's, the story follows two siblings as they unravel a mystery set into motion by their recently deceased grandmother.
Advertisement:

Eunice Akinya was an intrepid explorer and shrewd business woman who built up her family into a spacefaring business empire. But for the last sixty years she has been living in self-imposed isolation in her personal space station, seen by the family as aloof, uncaring, and possibly mad. Her grandchildren, Geoffrey and Sunday Akinya, would like nothing more than to follow their own interests rather than going into the Family Business: Geoffrey with his elephant studies in Kenya, and Sunday with her artistic endeavors in the bohemian "Descrutinized Zone" on the dark side of the moon. Their more dedicated cousins, Hector and Lucas, run the day-to-day operations.

When Eunice passes away suddenly, Geoffrey and Sunday find themselves dragged into family matters. At the funeral, Hector and Lucas reveal that Eunice had a mysterious safety deposit box in a bank on the moon, and they task Geoffrey with opening it to make sure it's contents are not damaging to the family's name. While on the moon, Geoffrey meets up with his sister and together they discover that safety deposit box is only the start of a series of clues, apparently laid down nearly a century before Eunice's death. Unwittingly they find themselves drawn into a mystery extending far beyond the moon - to Mars, the outer solar system, and possibly beyond to Mankind's future.

Followed by standalone sequels On the Steel Breeze and Poseidons Wake.