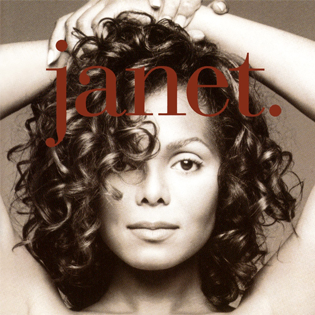 janet. is the fifth studio album by American singer Janet Jackson. It was released through Virgin Records on May 18, 1993.

Rhythm Nation 1814 was the last album Janet was contracted to record for A&M Records. With the success of that record and Control, a bidding war ensued for her services. Richard Branson came out on top, signing her for eight figures—the exact number is unknown, but is estimated around $32-50 million.

But what could she do for an encore after the last contract? For her, the answer was easy: blaze a new trail, and distance herself further from her famous family, proving once and for all that she could be a megastar in her own right.

Hence the period in the album title.

Though she kept Jimmy Jam and Terry Lewis as co-producers along with her, she took a much larger role in writing the songs on the album. She began to diversify from the New Jack Swing sound she helped craft, adding in the Hip Hop Soul subgenre that Mary J. Blige and Jodeci popularized the year prior. The lyrics in her songs reflected more liberally sexual imagery, but still tastefully so. She sought to give a no-holds-barred female perspective to sexuality.

The final album was a CD format-busting 75 minutes long, and featured interludes between most of the songs, just like Rhythm Nation. A two-disc Limited Edition CD album was released soon after, with the second CD featuring remixes of several of the album's tracks.

To say it worked would be an understatement. The newly-christened "Queen of Pop" would turn janet. into a six-times Platinum record in the United States. It debuted at #1 on the Billboard 200 album chart, finishing in the Year-End Top 10 for two consecutive years (#4 in 1993, #8 in 1994). The album would also make a bigger impact worldwide, selling 19 million copies in total, her biggest-selling album to date. In the end, it would reach #31 in the Billboard Decade-end Chart for The '90s.

Janet launched a world tour to promote the album on Thanksgiving weekend of 1993, and toured through April 1995, playing 123 shows over seven legs and grossing over $83 million worldwide.

"That's the Way Love Goes" won the Grammy Award for Best R&B Song in 1994. The music video for "If" raked up awards, including the MTV Video Music Award for Best Female Video.

The song "Again" appeared in the 1993 film Poetic Justice, in which Janet starred alongside Tupac Shakur. But that film has a separate soundtrack (the song is not on it), and the soundtrack features no other songs by Janet. Nevertheless, "Again" was nominated for an Oscar for Best Original Song at the 66th Academy Awards in 1994, where she performed the song at the awards ceremony; it lost to "Streets of Philadelphia".

"My mind is starting to burn with forbidden tropes"