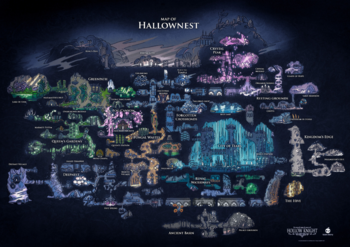 Map of Hallownest
In wilds beyond they speak your name with reverence and regret,
For none could tame our savage souls yet you the challenge met,
Under palest watch, you taught, we changed, base instincts were redeemed,
A world you gave to bug and beast as they had never dreamed.
-Elegy for Hallownest by Monomon the Teacher
Advertisement:

The kingdom that the Knight travels through in Hollow Knight. While it was once a prosperous place full of life, it's since been reduced to ruins, with the majority of its population dead, missing, or overcome by a strange madness. 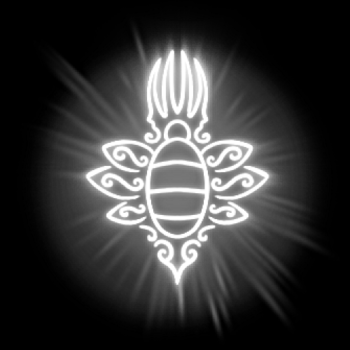 The great Kingdom of Hallownest stretched itself deep into the caverns, built beautiful and wonderful things and was home to many great bugs and Higher Beings. It was not meant to last however; a mysterious plague took hold in the citizenry and forced them into savagery. The Pale King, monarch of Hallownest and its physical god-figure, did all they could to stave off the end but all in vain - the Kingdom was doomed.

Much time has passed, when the Knight stumbles into the old caverns to seek out its secrets.

Within the caverns you traverse live all sorts of different creatures, civilizations and tribes - and not all of them are related to the Kingdom of Hallownest itself!
See this page for the individual entries of the distinct groups living within the kingdom.

While Hallownest's citizenship may be on the decline, there are still a few friendly faces to be found there.
See this page for their individual entries.

Hallownest's history is deep, and its past still haunts it like a ghost.
See this page for the individual entries of the many historic figures of Hallownest.

Hallownest is full of many powerful foes that the Knight must face, some stronger than others.
See this page for the individual entries of the many bosses of Hallownest.