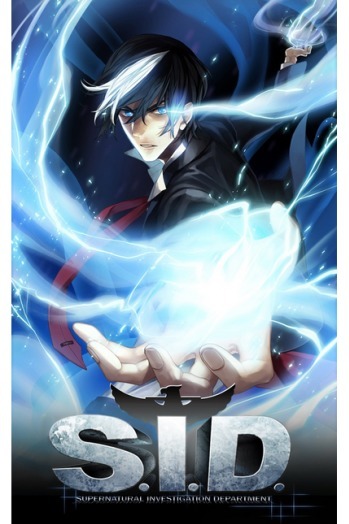 Simoon used Thunderbolt. It was super effective.
A new secret department was established at the police station to help fight against Somos. An investigation team dedicated to investigating supernatural phenomena and chasing down people with special paranormal abilities. The name of that invetigation team is...
S.I.D: Supernatural Investigation Department.
— Simoon Lee
Supernatural Investigation Department, or SID, is a Korean Wetoon by Sadaham. It's hosted on Line Webtoon.
Advertisement:

Follow the investigations of Simoon Lee, a detective who can see ghosts. Joining him on his adventures are Sophia Kang, an FBI agent who has come to Korea to deal with the supernatural terrorist organization known as somos, Baram, the son of an exorcist who's pretty good at it himself, and whatever Tenka is.

The story kicks off with Simoon investigating an arson-murder case with his friend Slate. Soon, however, he discovers that there's more to this case than meets the eye. Literally.

Simoon soon finds that the perpetrator of the murder was none other than the father of two out of the three victims, and the husband to the third. As a result of the murder the ghost of his youngest daughter has become a vengeful spirit.

She attempts to kill her father and Simoon, being a detective, is not about to let that happen. He does his best to protect the man but it doesn't seem to be enough. That's when a mysterious swordsman from Japan named Tenka steps in to help out (Simoon had met him earlier as he complained about his clothes being damaged by him).

Simoon then has a brief flash of memory of a charm that his grandmother gave him in case he saw ghosts again. He takes out the charm and it accidentally gets burned, unleashing Simoon's power, whoch takes the form of lightning. And that's all she wrote.

Soon Simoon finds himself embroiled in a conspiracy by the supernatural terrorist organization Somos. In order to stop them, and to help out spirits, he joins the Supernatural Investigation Department.